The mission of the Paradise Performing Arts Center is to provide the community with a state-of-the-art facility for the staging of a variety of cultural and public events. We are dedicated to providing a cultural center for all residents of the area to experience the entertainment, education, enrichment and enlightenment of a full schedule of events. Concerts, ballet, theater, multimedia presentations, political rallies, symphony performances, seminars, educational programs, debates, religious gatherings, art shows, school performances and education in the performing arts will be included.

As the need for and uses of a community performing arts center expands, it is our intent to attract and provide high quality events to meet these needs; our vision is to expand cultural and social horizons and thereby enhance the quality of life in the greater Paradise area and surrounding communities. We seek to increase the culture of the community through theatrical experiences as well as community involvement in the performing arts.

To achieve this vision, one of the objectives of the management of the Paradise Performing Arts Center is to encourage and assist local businesses and government to work together in a three-way partnership to promote economic development in the area.

Another objective is to increase general public awareness of the value of the cultural and educational programs available, especially uses of the PPAC by the schools in the Paradise area. We believe that community support for these objectives will be evident when citizens:

One of the roles of the Paradise Performing Arts Center is to work with other community organizations with similar goals such as: local schools, local theatre groups, Paradise Symphony, Northern California Ballet, the Gold Nugget Museum, Paradise Community Concert Association, the Academy of Dance, the Paradise Community Foundation, Paradise Chamber of Commerce, Butte Community and Chico State Colleges, and others by finding ways to help one another whenever possible to achieve mutually beneficial goals.

A very important objective is to locate and attract financial support through grants, as a way to present quality educational programs and entertainment at low or no cost to local school children.

The town of Paradise is located in the Sierra Nevada foothills, about 9 miles above the city of Chico, in the northern part of the Sacramento Valley of California. Paradise is a little less than a two hour drive from Sacramento via state route 70 or 99. Chico is served by a small airport with service by United Express out of San Francisco. Sacramento International Airport is a growing airport served by many major carriers. The Oregon border lies 200 miles to the north via Red Bluff, Redding and Mount Shasta, California.

Paradise is located on a beautiful forested ridge with elevations ranging from about 1,500 feet on the south to around 2,000 feet on the north. It is situated on a ridge with deep river canyons on two sides, an area rich in early California gold mining history. Paradise has a population of about 30,000 and the populations of nearby communities, all in Butte County, are: Magalia, 15,000; Stirling City, 400; Chico, 52,000 and Oroville, 14,000. The total population of the county is about 200,000.

The original name of the Paradise Performing Arts Center was the Paradise Auditorium and Community Center (PACC). The PACC was born on January 31, 1978 when a group of 125 Ridge residents gathered for a community-wide meeting to discuss the possibility of building an auditorium. One year later, on January 31, 1979, nine of those residents drew up and signed the Articles of Incorporation for the PACC. Documents to become a non-profit corporation were filed with the Internal Revenue Service and the State of California on March 7, 1979. Non-profit status under section 501 (c) (3) of the IRS Code was granted on October 15, 1980, and remains in effect to this day.

After completing a feasibility study, a capital fund drive was begun in the early 1980’s. By June 1984, over $1 million in cash and pledges had been raised. A unique agreement within the community during the fund raising was that this would be a pay-as-you-go project: no borrowing, and no tax dollars. This was the policy of the Board of Directors through the years until 1998. During these years, construction progressed in phases with funds in hand to complete each phase before the particular project phase could begin.

These first five phases were:

Phase I – 1983-85: Purchase of 7.2 acres of land; design and drawing of the complete project; installation of the drainage pond and septic system; $246,000.
Phase II – 1985-87: Building foundation and shell constructed; $665,000.
Phase III – 1989: Paving of parking lot and installation of curbs; $225,000.
Phase IV – 1993-94: Completion of the finished lobby and public restrooms; $148,000.
Phase V – 1995-96: Completion of the backstage area, restrooms, dressing rooms, and installation of a 50-ton air handling unit; $485,000. Accumulated architect fees are $218,000.
Phase VI – 1998: This final phase of construction of the great hall was completed in January, 1999. This was the most expensive phase of the project. It included rigging and curtains, a sophisticated digital sound system, two catwalks for stage lights, state-of-the-art lighting and controls, suspended acoustical panels, upholstered theater seats, a three-level cover for the orchestra pit, a cushioned stage floor, painting, carpeting and house lights. The cost for this final phase was about $1.2 million, with about half of that borrowed (for the first and only time) from Butte Community Bank. The total cost of the PPAC land and building is approximately $3.2 million.

Professionals who have seen the PPAC and are familiar with similar structures, describe it as the finest state-of-the-art facility in Northern California. One of them called it “The Jewel of the Foothills.”

The dream of this wonderful performing arts center began over twenty years ago. For the most part, it is the “little people” who have built this unique community resource. The largest and the smallest donation were both given by anonymous private individuals: $250,000 from one and $1.00 from another. The latter donation was left under the office door after a show with a note attached stating, “It’s really wonderful. I want to help. I wish it could be more.”

Three foundations have provided assistance: James Irvine Foundation, $30,000; S. H. Cowell Foundation, $100,000 and E. L. Wiegand Foundation, $39,300. A grant of $25,000 was received from Longs Corporation. Other donors include 76 businesses/companies and professional people along with 1,968 individuals. Other small communities have asked, “How did we do it?” They have tried to accomplish what we have in their own communities and have never succeeded. Call it determination, if you will. You have to want something badly enough to make it happen. In Paradise, enough people wanted their own performing arts center to see it through. It not only took money and a lot of sacrifices on the part of a few individuals, but untold hours of volunteer work as well. Not operating under any subsidy, the Paradise Performing Arts Center will continue to need financial support and volunteer workers if it is to remain a viable part of the community. Click here to find out how you can help.

Final cost of the Paradise Performing Arts Center is $3.5 million. The Spreckels Performing Arts Center in Rhonert Park, California was built by the city through the sale of bonds. This theater seats 660 people. It cost $10.2 million to build. In Irvine, California, The Barclay Theater was built through a combination of tax moneys and donations. This theater seats 780 people. It cost $17.5 million. We have a real bargain!

Our Performing Arts Center was built entirely through donations from individuals, local businesses, clubs and organizations as well as corporate gifts and grants. No tax or bond money went into its building. No government entity controls its operating policies.2,048 families and organizations have contributed $2.5 million dollars towards the building of the facility. This represents only a small portion of the combined Paradise/Magalia population of 45,000. Just think what might have happened had a simple majority of the population gotten behind the effort! 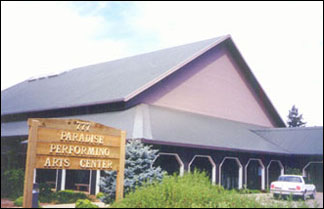